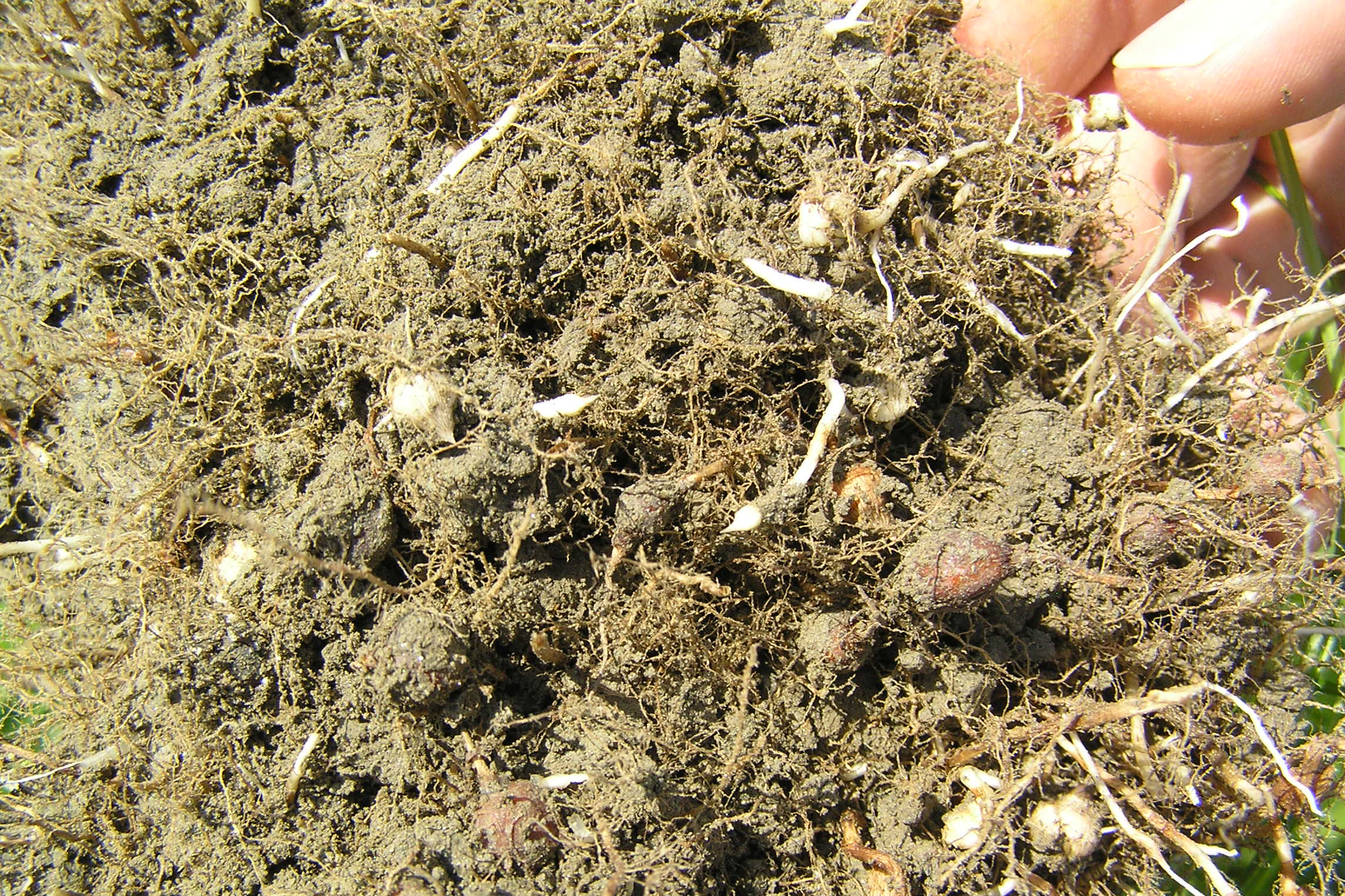 This small article gives an impression of how to control successfully yellow nutsedge in arable farming.

Summary
Yellow nutsedge is an invasive, exotic weed in arable faarming. It reproduces by means of small tubers. It flowers and produces germinable seeds. It spreads to other fields with soil sticking on machinery, wheels of vehicles as well as on shoes. Regular soil disturbance is the best control practice so far.

Facts
Yellow nutsedge (Cyperus esculentus L.) belongs to the Cyperaceae family, which comprises rushes and sedges.  The way of multiplication and propagation is special with yellow nutsedge. It produces pinhead sized to pea-sized tubers in large numbers. Most tubers are found above the standard ploughing depth. Vital germination from 15-20 cm depth is not rare. The germination rate is high in green house experiments as well as in the field and the emergence rate is high. In a pot (volume of 30 litres each) experiment we noted a multiplication rate of 1:740 tubers in one vegetation period. Tubers are distributed from one field to the other by sticking to machinery, vehicle wheels and shoes, and they may even mix with harvest residues.

This invasive, exotic weed emerges in Central Europe from around mid April until the end of October. Plants can emerge and start forming tubers in the autumn of the year they emerged. Frost stops the growth of yellow nutsedge, and the leaves and stems dry up in winter. The species is sensible to the effects of soil tillage with rotating equipment. Herbicides with 100% efficacy are not known. The plant grows to a height of 30-70 cm, the stem is triangular, filled with marrow and does not have nodes. Leaves are of light to yellowish green colour, glabrous, leaf blades are clearly divided by a midrib ending in a strong tip.

Infoflora** has listed yellow nutsedge on their blacklist for invasive neophytes that currently have or are expected to have a high spread potential in Switzerland. Yellow nutsedge is known for causing damage to agricultural economy due to additional expenses for weed control, possible crop failure and loss of quality of crop harvest.

Experience with control
Grass weed herbicides show no effect on yellow nutsedge. Regarding the enormous reproduction potential, other herbicides are quite moderately efficient. Even fleece and plastic mulch do not always successfully prevent the reproduction of yellow nutsedge. The problem is that surviving and tuber producing plants assure the ongoing invasion. Eradication within a normal crop rotation was not yet observed. Additionally, tubers by vehicles and machinery is always a strong factor for propagation. Really good experience in reducing the number of tubers was made with power driven harrowing.displacing

Trials showed best efficiency in destroying mechanically young plants in 2 to 5 leaf stage. Important is a conventional surface cultivation, that needs to be repeated several weeks after emergence. Maize offers the best conditions for this strategy, but it requires a one-month delay in sowing  (May instead of the normal sowing time in April) at least in Central Europe. This additional effort will be worth only if it is repeated strictly every year either on the whole field or partially in infested zones. Machinery and vehicles used on infested fields should be cleaned seriously after every use or it should be used for infested fields exclusively. The often-cited effect of shading by crop competition does hamper tuber formation but does not stop the invasion. 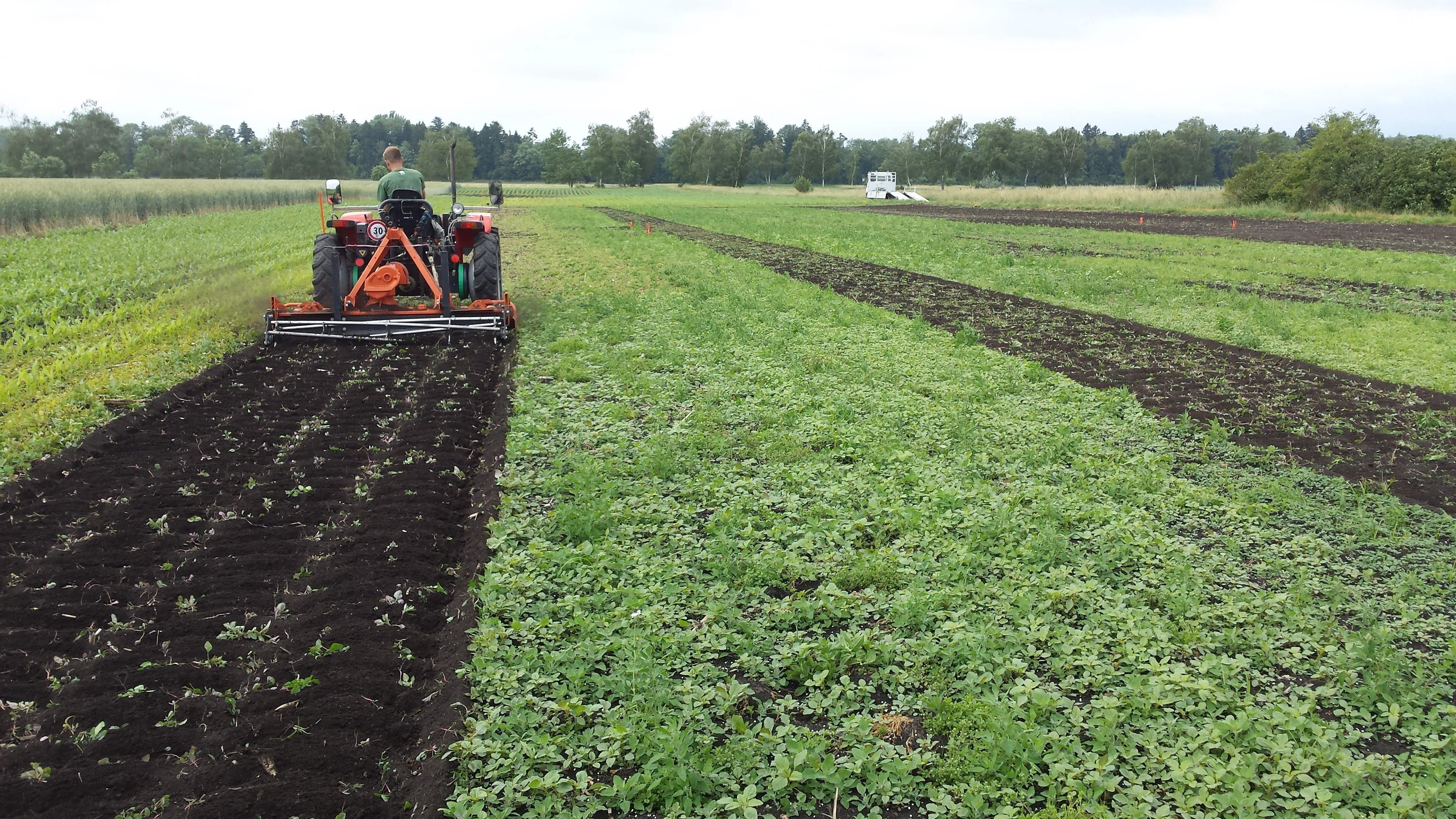 It is necessary to search for flowers of yellow nutsedge on an infested field during summer. In theory no flowers should occur, if yellow nutsedge control was done under best conditions with maximum of efficiency. Sometimes farmers tell anecdotes about massive emergence of yellow nutsedge in a certain zone, which did not repeat in the following year. We cannot exclude that plants that germinated from seeds (nuts) also produce tubers in the same year. However, it was proven that the multiplication rate of tubers is very high and tubers are displaced from field to field. 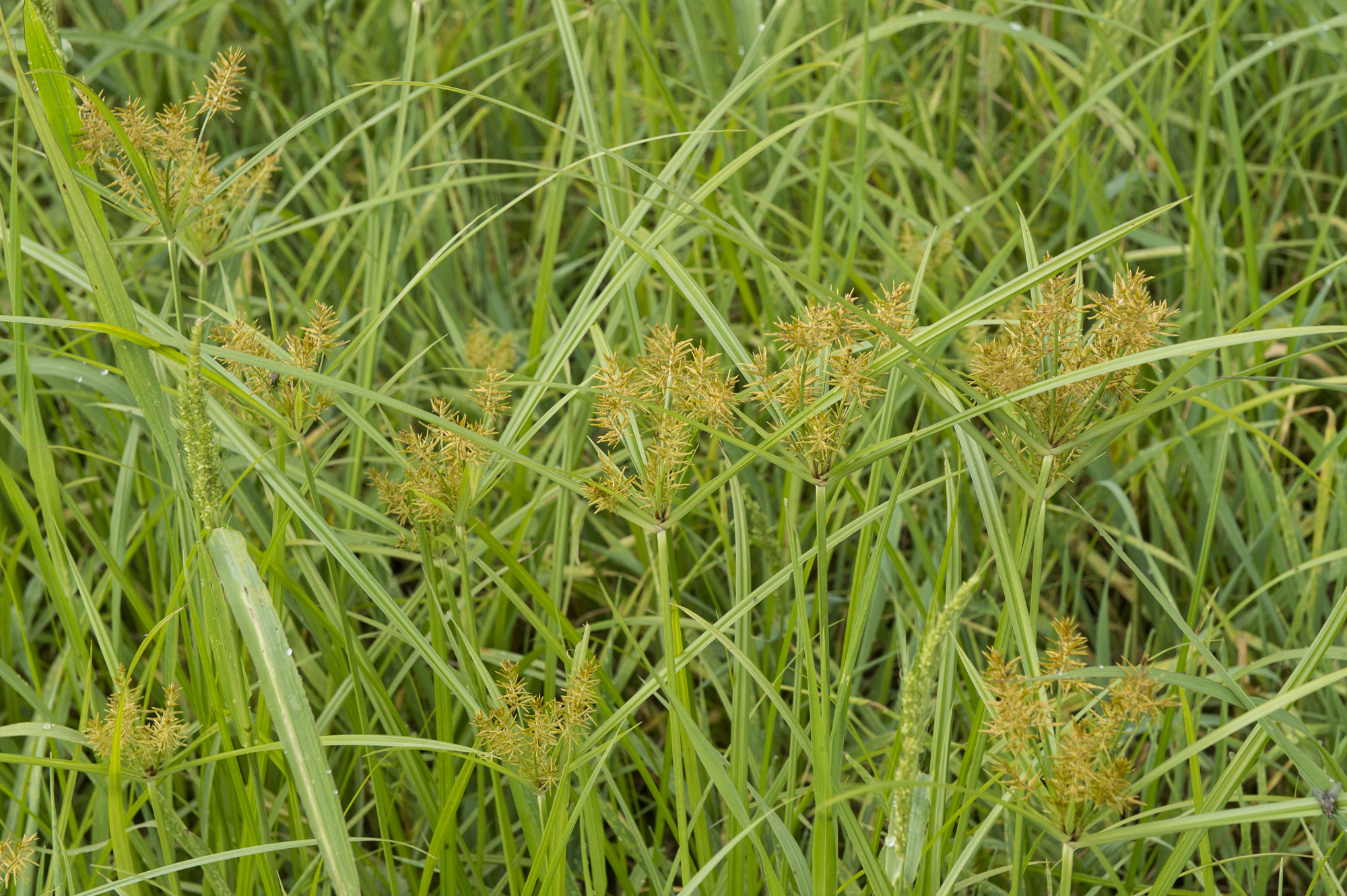 What to do in case of infestation?
Yellow nutsedge in a young stage can be easily confused with millets. In case of a suspicion do not hesitate to search for professional advice. This problematic weed represents the first case since long time for which the chemical industry has not found a suitable solution for arable farming in a short time. For successful control, a combination of control methods and crop cultivation is needed. An Agroscopevideo* describes the problem and gives some information on recognition and control in field crops.

Last but not least: - Farmers should not forget to exchange with their neighbours because of the risk for displacing tubers.

English version of the Agroscopevideo*: Yellow nutsedge - Recognition and control.

This text is a translation of an article "Folgenschwer im Ackerbau" published in the UFA-Revue 06/2020 , a journal of the Swiss agricultural cooperative fenaco (www.ufarevue.ch) in French and German. 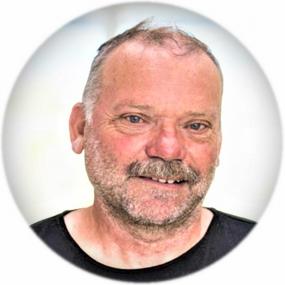